Thought your menstrual cycle was just about your period? In fact, your cycle is much more than just bleeding, and it can impact everything from your energy levels and mental health to your libido and skin.

‘It’s a fascinating process that’s controlled by hormones communicating with the brain and other organs,’ says Dr Elisabeth Rosén. ‘The core purpose of your menstrual cycle is to achieve a pregnancy, but this impacts your entire body in different ways.’

How long does a menstrual cycle last?

The average menstrual cycle is 28 days, but it can last anywhere between 21 and 45 days. 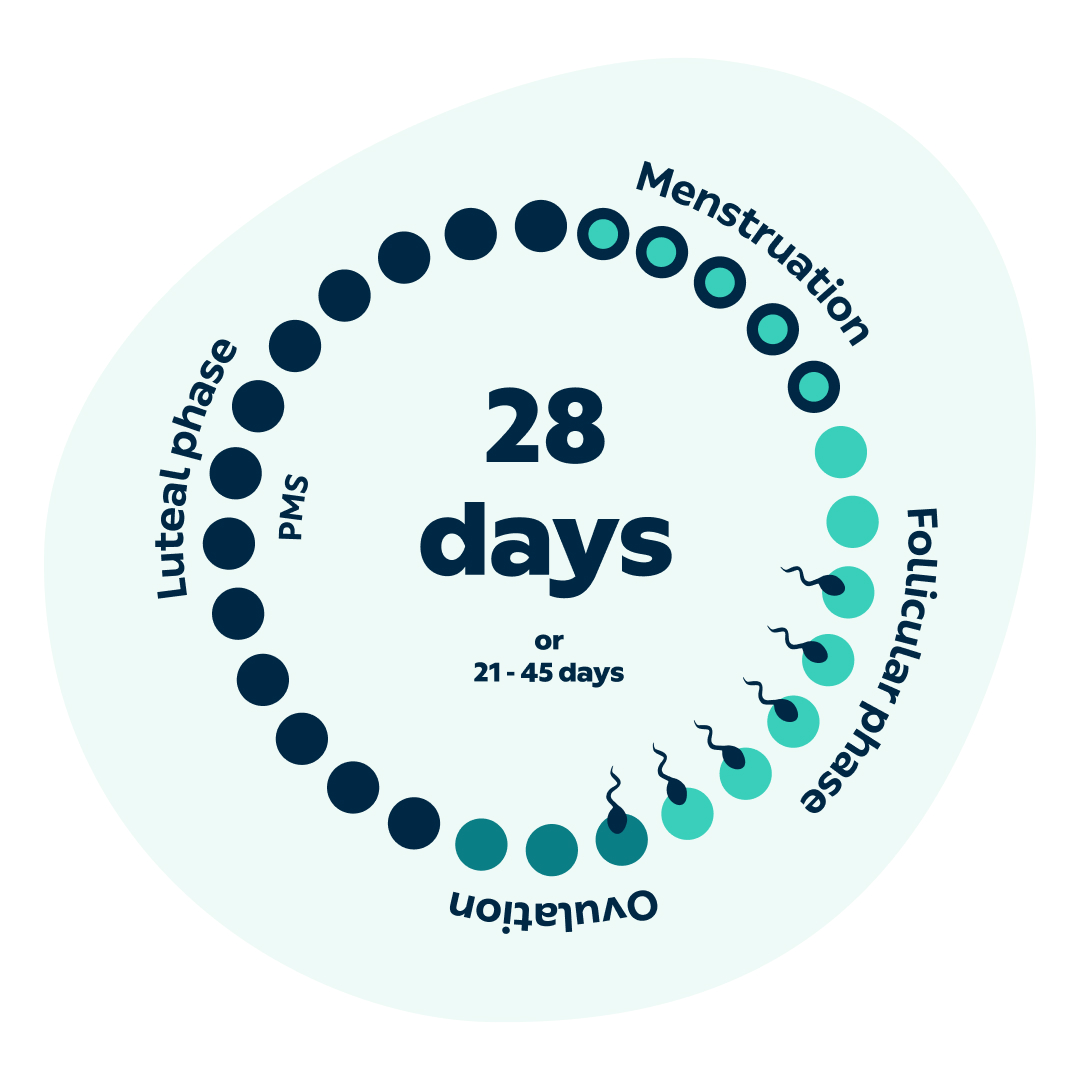 Irregular menstrual cycles are common too, especially if you’re experiencing mental or physical stress, or significant fluctuations in weight. ‘The body is clever – it won’t allow ovulation if it’s not ready for a pregnancy,’ says Dr Rosén.

But there are times when irregularities may suggest that something else is going on. ‘If your cycle is suddenly shorter than 21 days, it’s worth considering that it might not be a menstrual bleed but something else, which could suggest an infection in the uterus or changes to the cervix,’ Dr Rosén explains.

‘Similarly, an ovarian cyst can affect the fine balance of all our hormones, and conditions like polycystic ovary syndrome (PCOS) can cause your cycle to last longer than 35 days.

‘Later in life, irregular cycles are also the first sign of decreasing fertility and the start of perimenopause.’

Which hormones control the menstrual cycle?

Oestrogen is a female sex hormone produced by follicles in the ovaries. The most important job of oestrogen is to regulate the menstrual cycle. It makes the lining of the uterus – the endometrium – thicker and more receptive to a fertilised egg. Oestrogen peaks just before ovulation.

Progesterone is the other main female sex hormone. It’s produced by the corpus luteum – the leftover follicle after an egg has been released during ovulation. Its main job is to keep the endometrium in place and optimise it for implantation, and it peaks around day 21 of the menstrual cycle or about a week after ovulation

FSH, or follicle-stimulating hormone, is produced in the pituitary gland in the brain. Its role is to get the egg follicles to mature, and it also plays a major role in kick-starting puberty.

FSH rises during menstruation. It drops a couple of days before ovulation, when it’s important in the process of the body choosing only one egg for further maturation. It then rises again and helps facilitate ovulation before dropping to its lowest levels just before menstruation.

LH, or luteinising hormone, is also produced in the brain. Its job is to make ovulation happen and release the egg that’s the most mature. The production of LH is triggered when oestrogen levels peak, and it’s the spike in LH that makes ovulation happen.

The key phases of the menstrual cycle

From around the first day of your period until ovulation.

‘The eggs in your ovaries are always there, trying to grow, but they’re only released for fertilisation when the hormonal balance is exactly right,’ says Dr Rosén.

During this phase, the pituitary gland starts to produce FSH in response to the low levels of both oestrogen and progesterone.

The FSH makes the follicles grow and produce oestrogen. The lining of your uterus grows thicker in preparation for a fertilised egg to get implanted, and eventually, when the oestrogen reaches a certain level, the FSH level drops.

Potential migraines – ‘Oestrogen levels are low at the beginning of the follicular phase, so if you’re prone to hormonal migraines, this is when you’re likely to get them.’

Increased libido – ‘Oestrogen tends to stimulate libido, so you may notice your sex drive increasing throughout the follicular phase,’ says Dr Rosén. This is your body’s way to try to get you pregnant, which is also why your vagina can feel fuller and your discharge more slippery.

Fuller breasts – Towards the end of the follicular phase, your breasts can feel fuller as well.

Ovulation occurs around day 14 in a 28-day cycle.

At the end of the follicular phase, one egg – or in rare circumstances, one from each ovary – has won the growth competition and is ready for release.

‘The mature egg produces so much oestrogen that it triggers the pituitary gland to release LH, which frees the egg,’ explains Dr Rosén. ‘It takes the egg around 24 hours to travel through the fallopian tube, where it must be fertilised for a pregnancy to happen.’ The egg survives for 24 hours, while sperm survive for up to 5 days.

Softer, more open cervix– ‘The blood flow to the uterus will peak, and the cervix opens to welcome the sperm. You can have a feel – it’s usually quite hard and backwards-leaning, but just before and during ovulation it will be soft and open, and you’ll get that egg white-like discharge that helps to support the sperm.’

The luteal phase of the menstrual cycle starts when the egg has been released during ovulation, so around 14 days before your period starts.

The egg leaves behind its shell – the corpus luteum – which starts to produce progesterone to help the lining of the uterus mature.

‘The body is waiting for a fertilised egg to move down through the fallopian tube and grow large enough to attach to the wall of the uterus, which takes a few days,’ says Dr Rosén.

‘At around day 21, the corpus luteum can’t cope any more, and progesterone production starts to decrease. Eventually, progesterone and oestrogen levels are so low that the uterus lining breaks down, which is what becomes the period of bleeding.’

Premenstrual syndrome (PMS) – If you’re among the 80% of women who suffer from some sort of PMS, this is the phase when you’re likely to experience it. ‘Progesterone has a calming effect, and its levels are low in this stage – so you might feel agitated, irritated and low,’ says Dr Rosén.

Hormonal acne – ‘Hormonal acne is usually worse during the luteal phase, again because of lack of progesterone.’

Bleeding – Most people bleed for 3-5 days, but this varies.

Potential cramping – Many experience mild cramping and discomfort during menstruation. If your pain is very severe, or you have an unusually heavy period or other worrying symptoms, there might be something else going on, so it’s best to talk to a doctor.

‘During ovulation. The timing of this varies, but it’s usually 14 days before the first day of your period,’ says Dr Rosén.

Getting to know your body throughout the menstrual cycle can be helpful, especially if you’re trying to conceive. ‘Pay attention to your vaginal discharge, have a feel of your cervix and notice if your breasts are starting to feel tender,’ Dr Rosén adds. ‘You’ll get to know the signs.’

6. How will my menstrual cycle change throughout my life?

From your first period...

The average age of getting your first period is just over 12 years, but this usually ranges from 9-15 years. ‘It takes a while for your body to adjust and get the balance of all the hormones right, but after about a year, your periods should be regular,’ says Dr Rosén.

Through potential pregnancy and later life...

With the exception of pregnancies and breastfeeding, and occasional skipped periods if you’re very stressed, your periods should continue regularly until you’re in your mid-40s.

‘As we get older, the quality of our eggs declines, which is why the risk of miscarriage and chromosomal abnormalities increases. The corpus luteum also becomes less effective at producing progesterone, so your menstrual cycle might become shorter,’ says Dr Rosén. This is usually the very first sign of perimenopause.

Ending with perimenopause and menopause...

‘After a while, you start to run out of eggs, and you won’t have your cycle every month. Despite not ovulating, your ovaries will still produce oestrogen, causing your uterus lining to grow. But as you’re not ovulating, you’re not producing progesterone – and so eventually the lining becomes so heavy it just falls out.

‘That’s why you can get very irregular but heavy, long-lasting bleeds until around the age of 51. After this time, if you haven’t had a period in a year, then you’re officially in menopause.’

This article has been medically approved by Dr Elisabeth Rosén, a medical doctor at Livi who specialises in gynaecology and obstetrics.

Speak to a GP about your cycle