“I was living in Middlesex when I started online dating and met my wife. I moved to Northampton in 2010 and we married three years later. I’m a self-employed kitchen and bathroom fitter which came in really useful for doing up our new home. Ellie, our rescue dog, joined us a few months after we married, and ever since we’ve loved going on long walks in the open spaces here.

Two years later, I moved my now 93-year-old dad close to me so I can look after him. I see him every day, and despite his various ailments he enjoys life, has a very cheerful spirit and receives the best care possible from medical support services. 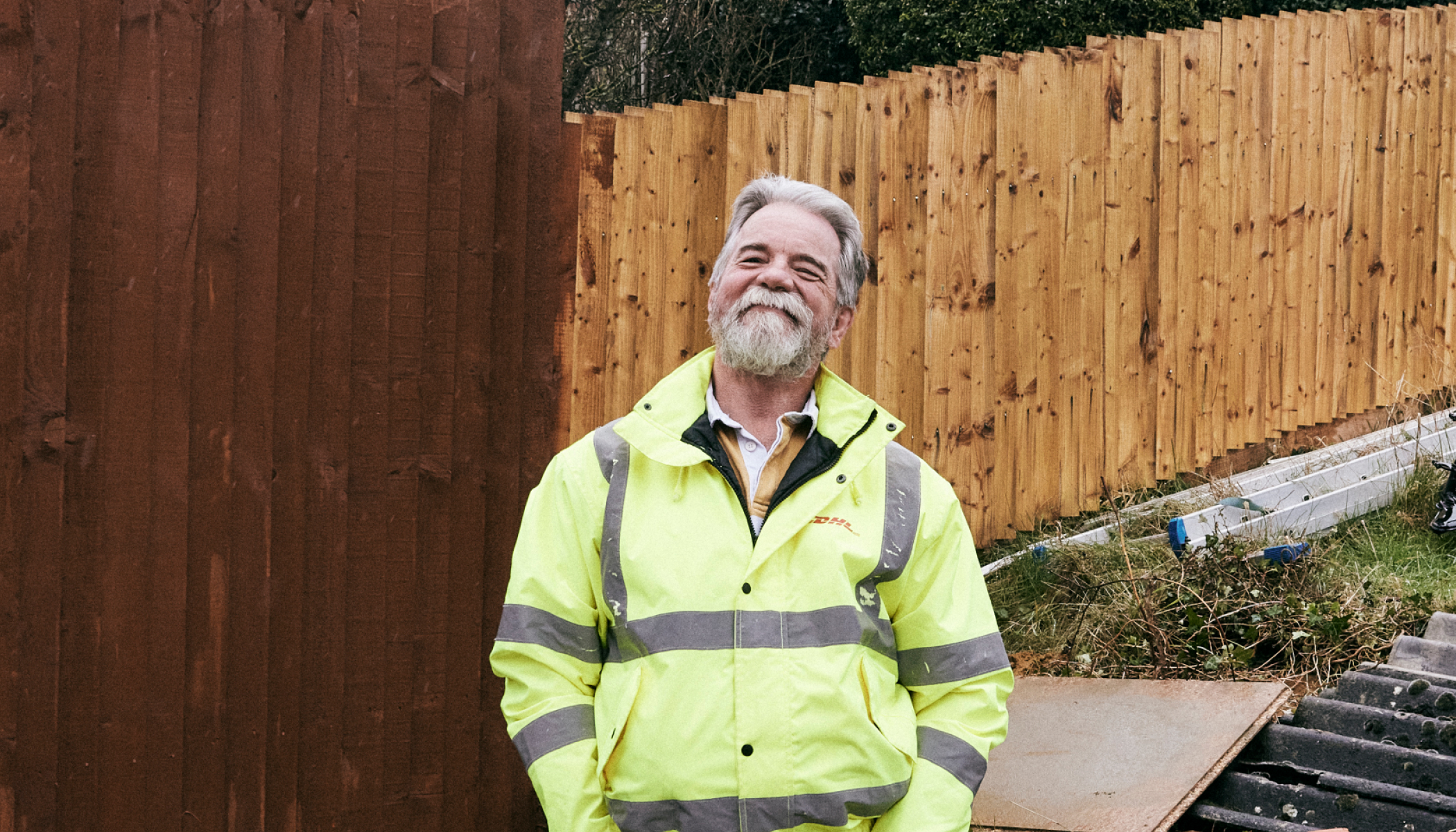 In 2015 I was diagnosed with psoriasis. But around 2020 I started getting to a point where my skin was becoming extremely irritable and itchy. I was scratching so hard in my sleep that I was drawing blood. Particularly on the backs of my legs, elbows and on my chest.

After many requests to see a dermatologist through my doctor’s surgery, I decided to go private to get on top of it, and my dad encouraged me too. The same dermatologist works at Northampton general, but the waiting list was too long. He was very on the ball – wrote me several prescriptions and sent me on my way. Though, it felt like he couldn’t get me out the door quick enough.

Prior to getting help, I’ll admit, I was drinking too much – relying on booze to get me to to drift off. I was desperate for sleep and couldn’t get it, just sitting in the living room from 3am to 7am, or lying in bed in discomfort. I needed answers. What was this painful condition? Why was it coming back?

After about two hours of opening the Livi app a doctor video-called me. He clearly knew what he was talking about. He looked at the list of medications I’d been given and asked if I actually knew what to do with them, but I was never told. The doctor really took the time to explain things properly.

I moved the camera around to show him my skin, letting him see the areas that were red raw. He recommended the right cream and it made me feel better within hours. Another piece of advice, which sounds silly, was to put the cream on and wrap myself in cling film! All over my arms, legs and torso. I looked like the Michelin Man. But the next morning I was right as rain.

It turned out I have nodular prurigo as well as psoriasis. My body builds up firm lumps which become sensitive. My skin regime involves very hot baths, exfoliating hard and using lots of creams to help the itching.

Psoriasis is a bloody nuisance, but the nodular prurigo has impacted me more – I struggle to sleep and it affects my daily life, so it’s a different story. I have to live with this for life as there’s no cure. 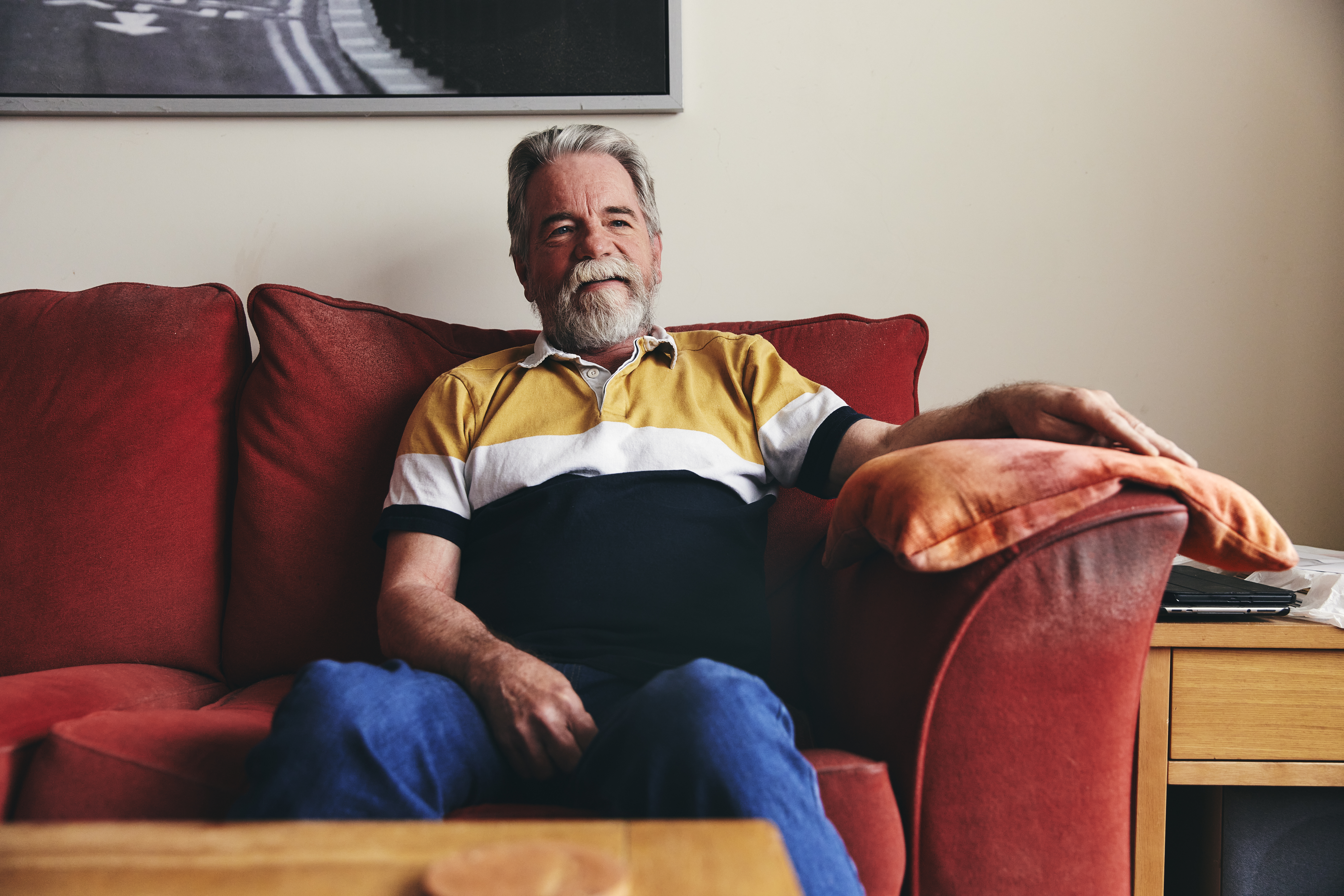 What my local doctor’s surgery has done, particularly with my dad, has been amazing. But they’re strained and under pressure. Once the dermatologist told me straight away what it was, Livi gave me confidence and helped me understand how to manage it.

I also used the app recently as I’ve had pain in the balls of my feet when I walk. Once again, the doctor I saw on video call really helped – he listened to my situation, looked at my medical history and helped me get diagnosed with arthritis.

I’m nearly 65 and I’m happy to say most of my life I’ve been physically fit and active. I take regular trips to Cornwall with my wife and Ellie and I’m even building a ‘man den’ in the garden at the moment! So getting hit by lots of physical complaints later in life is hard, but at the end of the day I come through smiling. We have to.”

“I lost 10 stone in a year, and my health problems snowballed. I have multiple complex conditions including diabetes, Bell’s palsy and skin cancer. I used to feel like a nuisance

Going through chemo is rough. I panic very easily and tend to catastrophise. Right now I’m just trying to live in the moment, but I can’t wait to get my life back